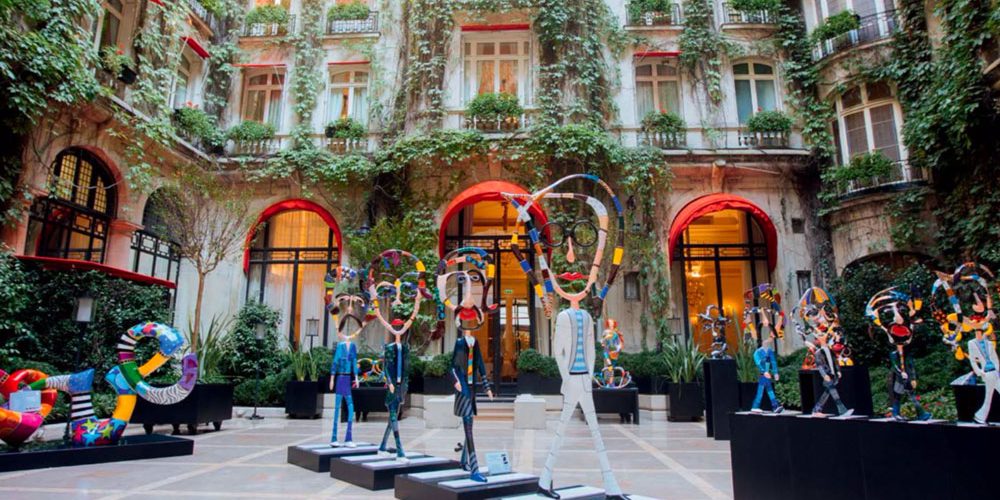 Dorit Levinstein creates commissioned works in different sizes and materials for indoor and outdoor settings, such as the Beatles inspired group of figures in this series. Colorful rhythmic patterns painted on the three- dimensional surface camouflage and break up the shape of the structure.

Exclusively Eden Fine Art represents Dorit and her work can be found in private collections around the world and in galleries in France, Holland, Switzerland, Germany, Singapore, India, the U.S. and Israel. She says of her creative process; “my childhood curiosity has never left me and urges me to constantly explore and search for answers that will satisfy me, at least for a time.  I don’t always understand exactly what I am looking for, but I always hope to find it”

After she casts, the figure is ready for its final metamorphosis, in which the sculpture is painted; she says it is a moment when a crucial dialogue takes place between the language of sculpture and that of painting.

The Deep Nocturne plinths for the Abbey Road aluminium sculptures required additional sanding time, due to the dark nature of the material, the darkest in the Corian® range.

The sculptures by Dorit Levinstein are to be displayed on top of the plinths and toured worldwide by Eden Fine Art. The four plinths allow the works to sit directly on the gallery floor and are robust enough for the global tour to New York, Paris, Geneva, Seoul and Hertfordshire.

Julian Opie graduated in 1983 from Goldsmiths School of Art, where Michael Craig-Martin taught him. He lives and works in London.

He is a visual artist of the New British Sculpture movement. Opie emerged as an influential figure in the British art scene of the 1980s, producing a series of painted metal sculptures that humorously combined loosely painted imagery with steel shapes. Portraits and animated walking figures, rendered with minimal detail in black line drawing, are hallmarks of the artist’s style.

Opie has exhibited widely in the UK and internationally and his works can be found in many public art collections, including the Tate, the British Museum, the Victoria & Albert, the Arts Council, the British Council, the National Portrait Gallery in London, The Museum of Modern Art in New York, ICA in Boston USA, Essl Collection in Vienna, IVAM in Spain, The Israel Museum in Jerusalem and Takamatsu City Museum of Art in Japan.

The Glacier White Corian® plinths have been produced for his new work to displayed in the UK.

Stylish Innovation on Show
22nd May 2018

Double Award Eastbourne Beach Hut becomes Prom King
27th April 2018
Categories
Recent Posts
Archives
Go to Top
We use cookies on our website to give you the most relevant experience by remembering your preferences and repeat visits. By clicking “Accept All”, you consent to the use of ALL the cookies. However, you may visit "Cookie Settings" to provide a controlled consent.
Cookie SettingsAccept All
Manage consent